A Vygotskian Analysis of Children's Play Behaviours
Beyond the Home Corner

What are VitalSource eBooks?

Prices & shipping based on shipping country 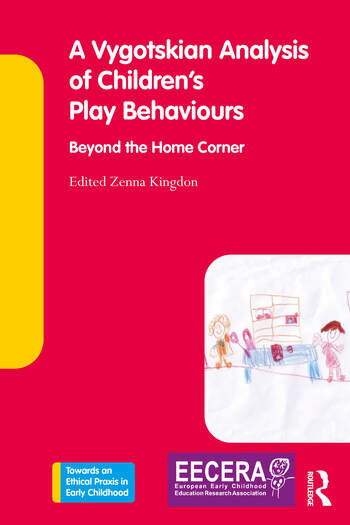 A Vygotskian Analysis of Children's Play Behaviours: Beyond the Home Corner

What are VitalSource eBooks?

Routledge & CRC Press eBooks are available through VitalSource. The free VitalSource Bookshelf® application allows you to access to your eBooks whenever and wherever you choose.

Most VitalSource eBooks are available in a reflowable EPUB format which allows you to resize text to suit you and enables other accessibility features. Where the content of the eBook requires a specific layout, or contains maths or other special characters, the eBook will be available in PDF (PBK) format, which cannot be reflowed. For both formats the functionality available will depend on how you access the ebook (via Bookshelf Online in your browser or via the Bookshelf app on your PC or mobile device).

This book brings a refreshing Vygotskian perspective to the importance of children’s play, and the role it has in the physical, social, emotional and cognitive development of young children. The authors use a praxeological approach and participatory, ethical research to provide a comprehensive yet accessible addition to the crucial and expanding field of Early Years play.

Including illustrative vignettes and case studies, and covering a range of contexts, theories and approaches, the experienced authors explore a variety of topics, including:

Endorsed by EECERA, A Vygotskian Analysis of Children's Play Behaviours is an ideal choice for Early Years practitioners, researchers, policy makers, and academics researching or lecturing in early childhood education.

Part 1: Contexts and Principles: An analysis of Vygotsky’s approach to play.

Chapter 4. Sharing with families the meanings and educational value of role-play

Chapter 5. The Role of Drama in Role-Play

Chapter 6. Places and spaces for role-play in digital and multimodal childhood.

Chapter 7. Socio-dramatic play: Scenario and role development as enacted by children and as facilitated by their early childhood teacher through drama

Chapter 9. Organising the family: role-play in the home environment

Zenna Kingdon is currently with the University of Wolverhampton, UK where she teaches from undergraduate to doctoral programmes.

This book is included in the following series:

The country you have selected will result in the following:

This will help us determine what currency and product offerings to display.